On April 12, Tanja Gönner of the German Society for International Cooperation, Minister for Economic Cooperation and Development Gerd Müller and Salah Ahmad of the Jiyan Foundation discussed the situation of refugees in the neighbouring countries of Syria. The event took place at the “Der Tagesspiegel”, a German newspaper.

Minister Müller reminded the international community to make good on their pledges to financially support the host countries. So far, the UNHCR has received only 7% of the financial requirements for 2016. He also encouraged civil society organisations to constantly ask the countries that pledged support to honour their commitments. “If you don’t act in solidarity, you will feel the consequences”, he said. If the 28 member states of the European Union don’t manage to come up with the promised €10 billion in support for the region, more and more refugees will be forced to go on the dangerous journey to Europe. This is not a decision made out of choice, but much rather owing to the desperate circumstances they are currently living in.

Salah Ahmad and Tanja Gönner illustrated the integration of the large number of refugees in Syria’s neighbouring countries by Northern Iraq, Turkey, Lebanon and Jordan by providing some concrete examples to the more than 130 guests at the event. For example, Turkey’s schools lecture Turkish children in the morning, and Syrian students in the afternoon.

Trauma and uncertainty about the future, cold and rain in winter and unbearable heat in summer weigh down heavily on the refugees. Many children witnessed brutal violence and lost loved ones. Not only the improvement of living conditions, but also psychological support are important steps to alleviate the mental consequences. This will also help them to build a peaceful society once the conflict has ended. 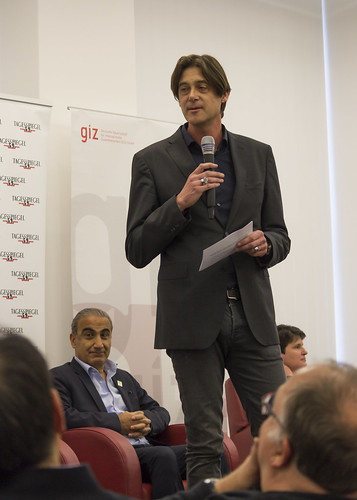